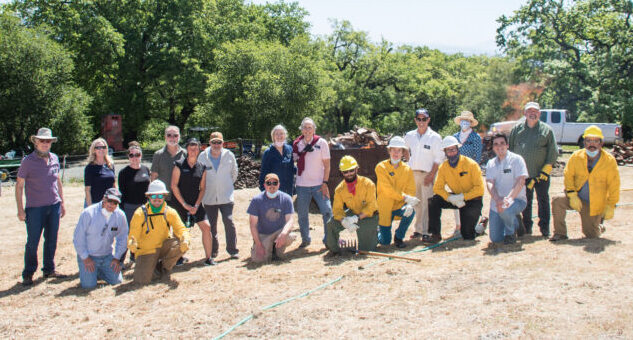 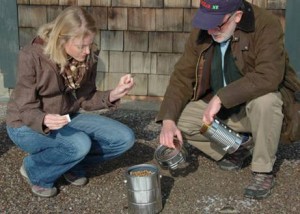 Marissa, a newly minted 2canologist at Shelburne Farms, working with NEBA* VP Jock Gill , has just lit about 4 pounds of softwood pellets in the 1G TLUD [Top Lit Up Draft] stove she has just built.   In about 75 minutes, this will produce about 1 pound of biochar suitable for experimenting

A LETTER FROM THE FIELD

It has often occurred to me that our children are not only being left with the accumulating messes of previous generations but they are also being carefully trained to carry on the very patterns that have precipitated the crises that we now find ourselves as a planet facing. Then we throw them into the media quagmire of fear, lies, and confusion while expecting prozac and Aderall to help them sort it out.

People, and most especially young people, need hope. In reality they don’t have to look far to see hypocrisy in many forms, they have to close their eyes almost completely to avoid seeing violence, and all the while they are starving for the wisdom to even begin to search for solutions.

When I look in the mirror and discover that there is now more white than brown in my beard, I realize that it’s high time for me to stop whining about what has already come to pass and instead focus all that I can on making things better. That sounds good. But we all know that talk is cheap and the road to hell is paved… So the bigger part of my resolution may be to make sure that I spend more time getting my hands literally dirty doing positive things with young people (young people of all ages) than I spend in front of a glowing electronic screen of any kind.

I have been passionately learning about biochar for the last few years. When I say learning, I mean in any way possible. I read, listen, and search for information anywhere that I think I can find it. I also love to learn by doing, so I have made it, applied it, and experimented with it on my farm with some remarkable results. Everything I learned or tried caused me to become even more excited about the possibilities for this wonderful ancient/new technology.

The real eye opener for me was when my teenage daughter, who had heard me talking with people about biochar so many times, she suggested that I come to her high school and explain biochar to her “Green Club”. I said sure I’d love to, then later realized that I would be standing in front of a group of high school kids talking about dirt. You know these kids, they’re the group that gets bored with the latest $300 video game after two weeks and I’m supposed to explain to them about carbon? What had I gotten myself into? So while bracing myself against the possibility of putting some teens to sleep, I packed up some samples, made some very crude diagrams and went to talk to the Nauset High School Green Club.

Surprises seem to follow wherever biochar goes. By the end of my humble presentation, these kids were telling me that what I was telling them was so important that I really needed to talk to the Principle about presenting this to the whole school. They wanted to learn how to make it themselves, how and where to apply it, and, by the way, “When can we get started?” I then realized that the key element that I had brought to the classroom that day wasn’t carbon, but for these kids it was hope.

I guarantee that all 1000 kids in that school have heard about global warming and it’s promises of coming disasters. Most of them are aware of the threats of disease pandemic, tidal waves, asteroid collision, air and water pollution, rainforest destruction, fossil fuel depletion, STDs, terrorist attacks, nuclear warfare, and the end of the world coming in 2012. Is it any wonder that they (we) are depressed and distracted? But here before them was a real possible solution to the question “What should we do now?” represented by a small pile of dirty, black, crumbly stuff on the teacher’s desk.

Since then, one science teacher at the school has stepped up to the plate, taken over the Green Club, and plans to do some trials with her botany class both in the lab and in a small greenhouse that the school has. Together, we will design and carry out experiments using biochar. It seems to me that we need to find many more teachers and schools who would be willing to join in and work together to produce an ever growing body of data that isn’t just repeating the same old experiments that you and I did when we were in high school, but, instead, let’s actually give the kids a chance to contribute to new knowledge – even if it’s on some tiny level. (Does biochar make Cape Cod beach plumbs grow better?) Again, I think that they need to be provided with the opportunity to be part of a solution, instead of just the inheritors of old unsolved problems.

The picture of you with the young lady next to the t-lud warms my heart because I can see that I’m not the only one thinking this way. I think that one of the most positive things that the newly formed NEBA could do is to encourage or provide simple experimental formats for individuals, farmers, or schools to use in order to explore the possibilities of biochar. NEBA could then also provide a simple, searchable data base that people could report into or refer to. I realize that the IBI is already doing this on a world wide scale, but what I long for is something that is more approachable for us common folk.

I’d appreciate any thoughts or connections you might give me on these topics.

Keep up the good work.

Bob Wells is the owner of Redberry Farm in Eastham, Massachusetts, where he practices carbon-negative, organic farming, rebuilding depleted Cape Cod soil with biochar. He is also a principal of New England Biochar. www.newenglandbiochar.org

The biochar gasifier pictured above , the 1G TLUD, is the creation of Dr. Hugh McLaughlin, Director of Biocarbon Research at Alterna Biocarbon, NEBA board member and Director of the Northeast Research and Demonstration Initiative, a project of the Northeast Biochar Association. Plans for building your own 1G are available at http://terrapreta.bioenergylists.org/content/1g-toucan-tlud-biochar-jan-2010

*”NEBA”  the Northeast Biochar Association, is about to be relaunched as Biochar Northeast.