SBI, in collaboration with the Sonoma Ecology Center (SEC), UC Riverside (UCR), and Pacific Biochar, are in the final stages of a two-year study of biochar’s ability to conserve water in agricultural settings, funded by a grant from the California Department of Water Resources (DWR). 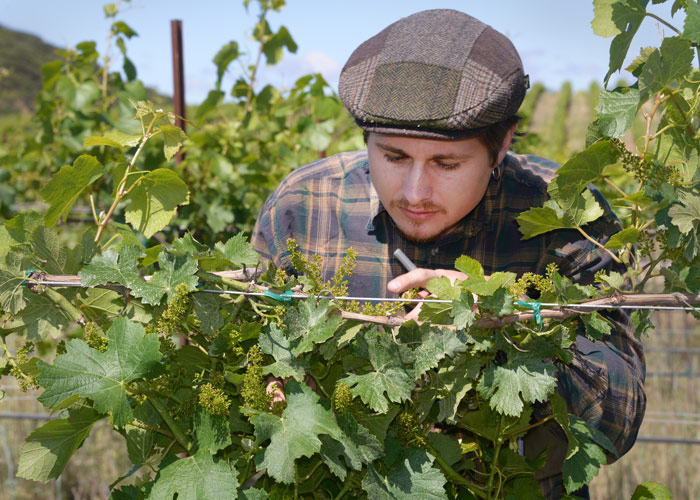 We will be releasing the results of the study later this year, but preliminary results are showing a significant increase in plant and fruit growth in the biochar treated plots over the control plots using the same amount of water. Much more coming soon. 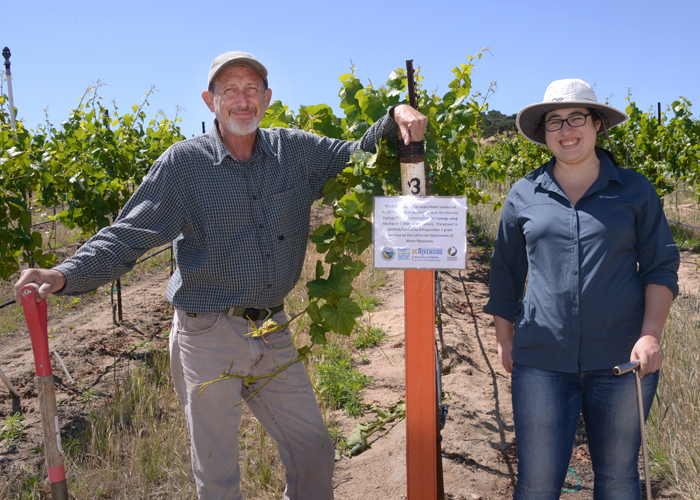 SBI, along with Kelpie Wilson of Wilson Biochar Associates, collaborated on a plan to convert fuels reduction materials culled from property owned by James Baskin and his wife in Del Norte County. This involved presenting the biochar story to the local air quality management district to gain a permit for small-scale biochar production using Kelpie Wilson’s Oregon Kilns, assessing the property for its fuels reduction potential, training James’ workers on proper kiln operation, and supporting his application for a new NRCS Conservation Activity that will rebate landowners $4800 per acre to perform fuels reduction work and produce biochar instead of open burning the material.  This project was one of the first two in the country to be awarded one of these grants. We are keeping tabs on this project and will give updates as it progresses. 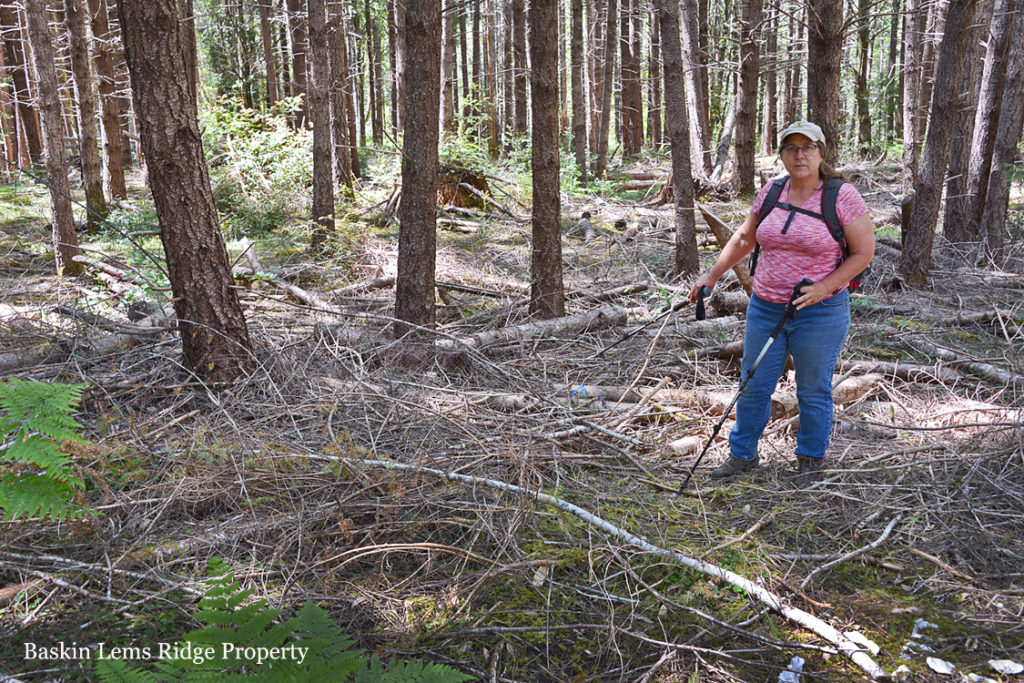 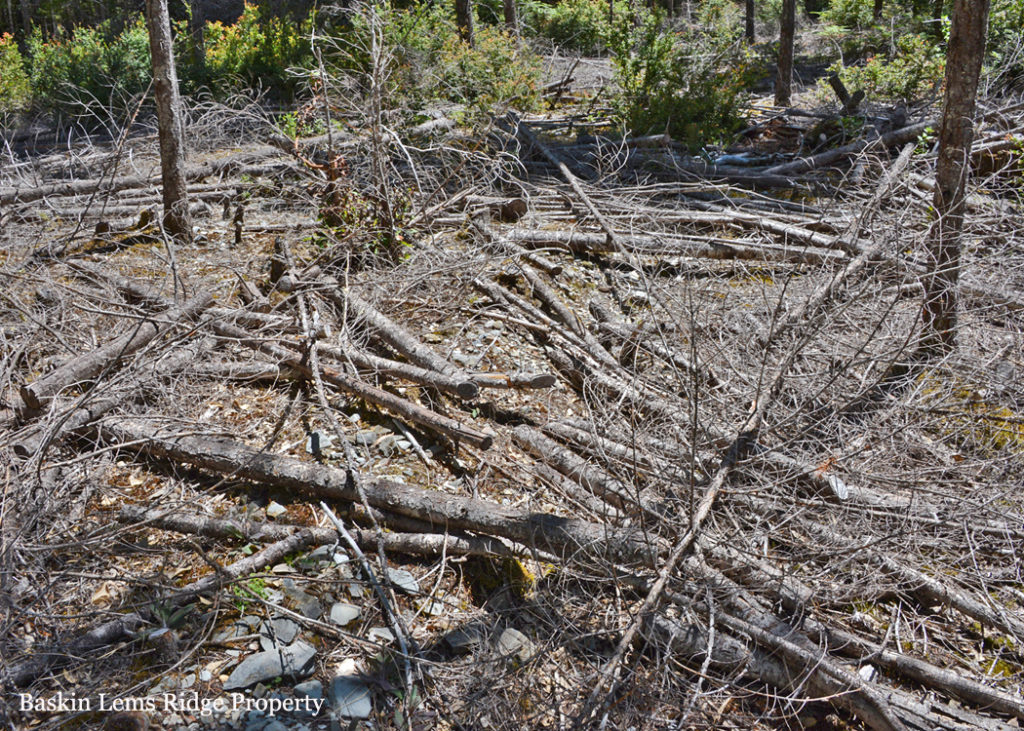 During previous thinning operations an excess amount of slash was left using a technique called “lop and scatter”. While a portion of this material needs to be left in place for habitat, and downed wood is a natural and critical part of all forest ecosystems, some of it can be converted into biochar and returned to the forest as a much longer lasting form of carbon.

Western forest ecosystems have adapted to fire over millennia and some, such as Redwood forests, need fire to seed new generations of trees. Yet in the last 100+ years we have done everything we can to stop wildfires. While understandable given the potential loss of life, human infrastructure and the income potential from the trees themselves, this has resulted in a massive buildup of what are called ladder fuels—materials that can allow less damaging ground fires to leap into tree crowns, doing much more damage. This lack of understanding about the important role of fire in forest ecosystems is causing much more intense, catastrophic fires than would normally occur, and coupled with the growing effects of climate change are leading to unprecedented loss of life and property as in Paradise, California.  Responsible biochar production, done as a part of a sustainable forestry plan, can play an important role in improving our forestry practices, helping to bring our forests—especially those near human communities—back into balance.

James Baskin, a former planner with the California Coastal Commission, has a dream of turning the property into a carbon conservation demonstration site and education center. This biochar project is a step towards that goal.

We have been working with a sustainably-minded young forester named Dan Falk of Falk Forestry, whose family owns 8,000 acres of forest and rangeland on the Northern Sonoma County Coast. Dan approached SBI about assisting him in finding the right technology to convert the large amount of forest slash produced during sustainable timber harvest operations on his family’s property and leftover materials from his small mill operation into biochar, which he then wanted to use to improve the rangeland grass production for his brother’s small-scale cattle and sheep operation*.

Dan needed something mobile and large-scale enough to handle the volume of material he was generating, and after surveying the options and a subsequent trip to Texas to see the operation of an ROI Carbonator biomass processor, we settled on this technology.  Dan purchased the second ROI model 500 off the assembly line and received delivery in late January 2019. 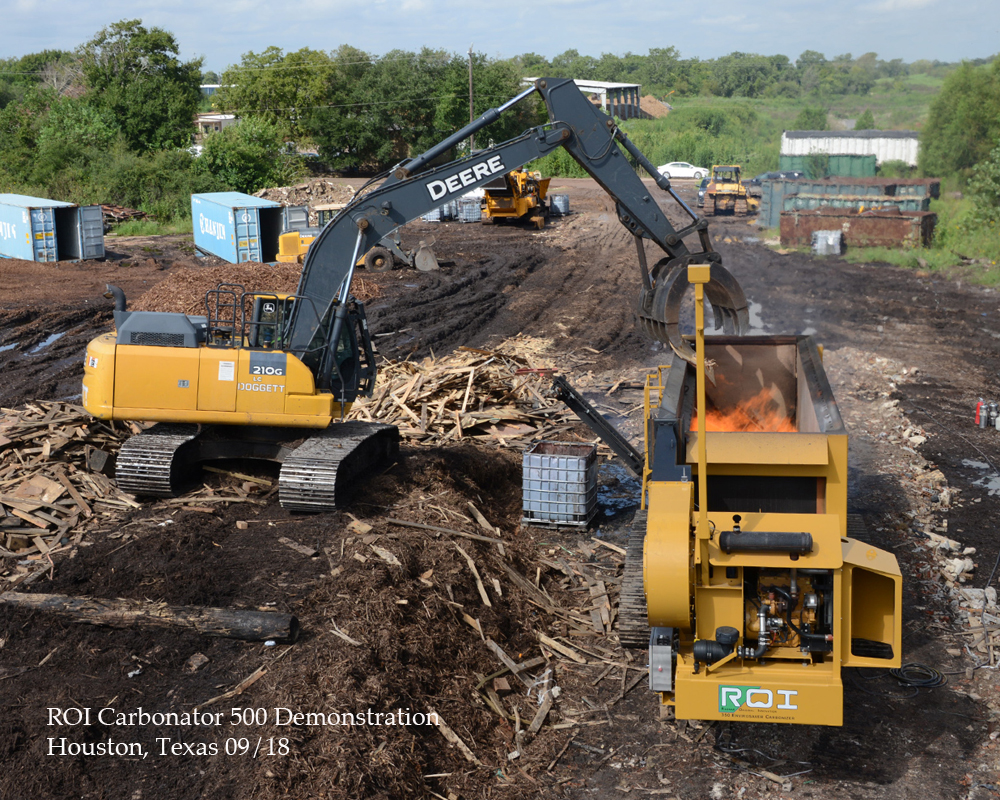 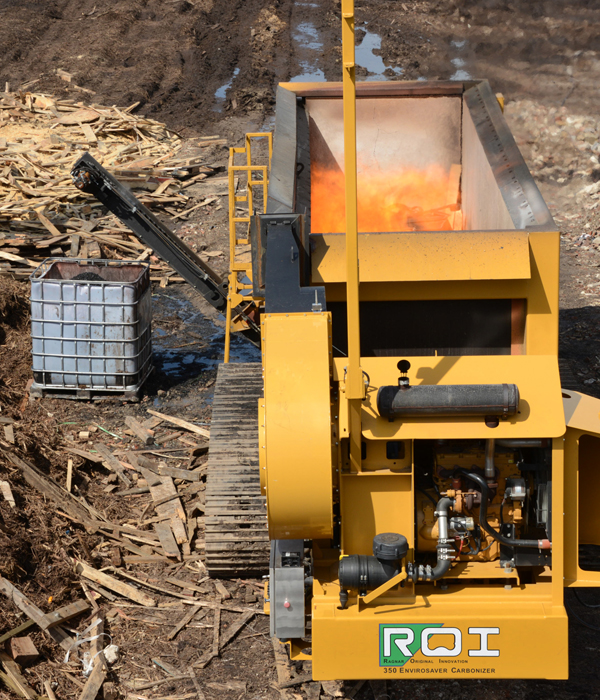 This photo shows an ROI biomass processor at work and the biochar that is being produced into the bin at left. 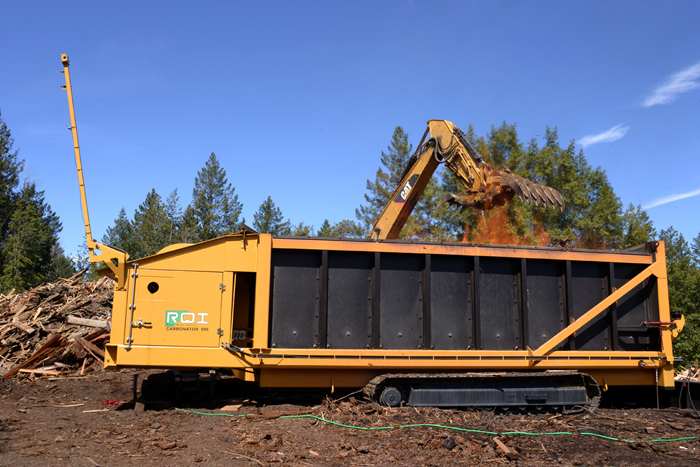 Dan Falk’s ROI Carbonator 500 at work on his property near Stewart’s Point in Northern Sonoma County, California. This technology significantly reduces smoke and particulate matter compared to open burning and converts a portion of the biomass into biochar.

There are stationary pyrolysis and gasification machines that can convert biomass into biochar at a higher efficiency, and that operate with even lower emissions than the Carbonator (check out Biogreen from France, Pyreg from Germany, and Pyrocal from Australia.) Where appropriate, we highly recommend these mid-scale technologies because they capture and utilize the gases and/or heat to produce renewable energy along with biochar, better utilizing the energy value of the biomass.  In Dan’s case he had recently installed a large solar array for the mill and didn’t need the power, and he wanted to be able to move the machine closer to the forest, reducing the GHG impacts of moving heavy biomass from the forest to a central location. Some of the (much lighter) biochar could then be left right in the forest and the rest could be applied to nearby rangelands.

The key thing to remember is that there is no one method of biochar production that is right for all situations, and that finding the right scale and most practical and realistic conversion method will vary depending on the situation. There are earthen pit and metal kiln techniques that are cheap, available to anyone, and that make excellent biochar.  There is a simple way to manage open burn piles that reduce smoke and produce biochar that we call conservation burning. And there are a whole range of technologies that increase in complexity, efficiency, scale and price that can be considered depending on the type and amount of biomass that needs to be processed.

We are currently looking for grant money for the science part of the project, studying changes in soil structure and grass production with the application of a blend of biochar and compost. Adding biochar to soils is a direct and immediate method of increasing soil organic matter (SOM), the amount of which helps define healthy and more productive soils. 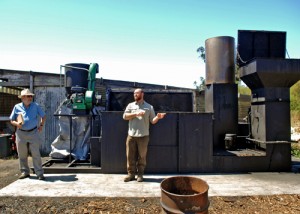 The quality of the biochar produced in the Adam Retort unit has been uniformly excellent.  Soil and plant growth tests were conducted to inform the efficacy of biochar to increase soil moisture and water conserving properties in the face of drought conditions. Project results demonstrated both significant water savings and need for less water use/irrigation and improved crop yields with the introduction of biochar as soil amendment.  In addition to exploring the operation and production of biochar at community scale and conducting USDA-approved field trials, the project partners conducted education and outreach activities in the region.  For more information, the following reports are available here: