In collaboration with The Vineyard Team and the air quality management districts in San Luis Obispo, Monterey, and Santa Barbara counties, we are happy to announce that we will be giving conservation burn workshops in each county on April 3rd, 4th, and 5th. Each workshop will be 4 hours in length and include a lecture on biochar and the theory behind this cleaner burn methodology along with a hands-on field burn.

Here are the dates and locations.  To register, CLICK HERE.

SBI is offering a 1.5 hour Biochar Workshop this Saturday, April 21st, from 10:30 A.M. to 12 P.M, as part of the Earth Day activities at the Sonoma Garden Park.  Learn about what biochar is, how you can make it yourself or where you can purchase it locally, how to use and apply it, and why we believe all gardeners should be using it. You can help actually DO something positive about climate change just by using biochar. Come learn how!

The Redwood Forest Foundation, Inc. (RFFI), a non-profit organization that owns and manages the FSC Certified Usal Forest on the Lost Coast of northern California, is now producing high-carbon, low-ash biochar from surplus tan oak culled during forest restoration activities.  Production started on June 1, and this high-quality soil amendment is being marketed under the name North Coast Biochar.

Sold in 1 or 1.5 cubic yard totes, this product is made using a Biochar Solutions pyrolysis unit that is specifically designed to make biochar at the middle heat range of 500 to 700 degrees C which is considered an ideal temperature range to maximize biochar’s adsorptive qualities.  By purchasing this product you will be helping to support three non-profit organizations (RFFI, Sonoma Biochar Initiative, & Sonoma Ecology Center) working to promote sustainable agriculture and forestry practices. For more information, call Raymond Baltar at 707 291-3240. 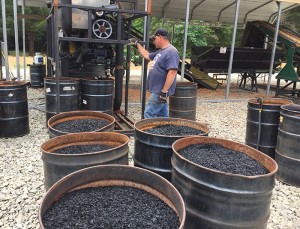 In collaboration with Weber Family Farms in Petaluma, The Sonoma Biochar Initiative and Sonoma Ecology Center are now offering buckets of biochar-enhanced chicken manure pellets as thank-you gifts for donations during a special fundraising campaign.  The chicken manure is an OMRI-listed organic manure that is high in nitrogen and blended with biochar made from locally-sourced woody biomass. 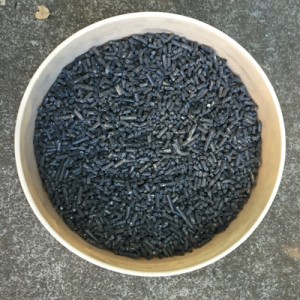 This fantastic soil amendment has been pelletized for easy application and can be used anywhere in your garden. Two sizes are available:  5-gallon and 2-gallon buckets. We are asking for a suggested donation of $30 for the 5-gallon size, and $20 for the 2-gallon size. This special blend is available for pickup on Saturday mornings at the Sonoma Garden Park Fam Market, from 9 A.M. to 12:30 P.M., 19996 7th St E, Sonoma, CA 95476, or by special arrangement at Sonoma Ecology Center offices in the Sonoma Developmental Center.

We want to thank Mike Weber of Weber Family Farms for his generous donation of goods and services in support of this fundraiser.

The Synergy of Science and Industry:  Biochar’s Connection to Ecology, Soil, Food and Energy

Registration is now open for what is sure to be a fantastic gathering of scientists, entrepreneurs, farmers, enlightened government officials, energy, soil, and fire geeks, agricultural change agents, NGO’s devoted to sustainable practices and carbon sequestration, backyard biochar tinkerer’s, and folks just interested what all the fuss about biochar is about.

Located at the CH2M Hill Alumni Center in beautiful Corvallis, Oregon, it is sure to be the biochar event of the year in the U.S.

A Workshop and Demonstration

The Sonoma Biochar Initiative (SBI)recently received a formal invitation from CalFire to submit a full grant application to expand our Conservation Burn Training Program statewide. CalFire received 381 Concept Proposals, totaling over $135 million, from various entities and landowners throughout the state under California’s Greenhouse Gas Reduction Funds Grant Programs, and only a limited number of these received an invitation to submit a full proposal by April 30th. Unfortunately, only $21 million is available for funding for the fiscal year 2014/2015 and not all proposals will be successful. However, we strongly believe the conservation burn training program has so many merits as a greenhouse gas reduction strategy and co-benefits to the ecosystem with the resulting production of biochar that we feel our proposal stands a good chance of being funded.

SBI has also been working to advocate at the state level for large-scale, high-profile biochar field trials. We hope to start working soon with California Food and Agriculture Director Karen Ross’ office to coordinate a stakeholder meeting (including representatives from the academic, technology, agriculture, business, policy, energy, and biochar advocacy sectors) to come up with a roadmap to bring these essential field trials to fruition.

Just a quick reminder that we are hosting a community meeting tonight at the Sonoma Grange, from 6:30 to 8:30 P.M., featuring Judith Harwood of the Mendocino Woody Biomass Working Group and Jason Aramburu of re:char. You can register online here: http://events.r20.constantcontact.com/register/event?llr=mausxnlab&oeidk=a07e7iq4sa59e54b840&oseq= or just come to the meeting. We are asking for donations at the door to help us offset costs: $15 general, $10 SBI members, and $5 students and seniors.

Bring your ideas and questions about biochar!

The Sonoma Biochar Initiative was recently awarded a $1000 “Power Your Community” grant from our local utility, P. G. & E. This money is being put to immediate use in helping us purchase a large quantity of biochar for local field trials in Sonoma and Napa counties. We sincerely thank P. G. & E. for helping us realize our goal of installing biochar demonstration plots to gather data on its effectiveness in local farm settings.

On Monday 10/24 our Biochar Working Group, consisting of SBI members and Sonoma County agencies, traveled to All Power Labs in Berkeley to review their famous gasifier-generators. I attended a workshop there a year ago, and was impressed then with their new Power Pallet, a computer controlled gasifier tied to a 10 KW generator. An elegance of positive feedback, once fully cycling the 700C exhaust from the engine heats the pyrolysis chamber, heating the biomass and rending the carbon from the energy gasses, which are then filtered and cycled back across the hot char, both cleaning the gas and adding carbon, for cycling as fuel to the engine. A very small amount of char and ash remains. The ultimate sense of system efficiency is reflected in the total exhaust, being what appears to be only warm water vapor. APL is also known for the base unit of this, the GEK, or Gasifier Experimenters Kit. Up until the popularity of the Power Pallet focused their energies, they also had the BEK, or Biochar Experimenters Kit. They are down to their last, in house, BEK, somewhat dusty from inattention.

Now, a year later, they have a 20 KW Power Pallet. Several finished units waited with tags for far flung destinations, Mexico, Indonesia, Malaysia.  Out in the yard was the next prototype, a Godzilla among lizards, the 100 KW unit. They don’t call it Godzilla, but it fits, if only in a shipping container. It is project for the University of Minnesota, funded by DOE. One partner in the grant is Cummins Diesel, so that is the power plant. They will have to make some modifications to the process, as they usually work with a sparked engine, with visions of turbo-charged V8’s for round two. The entire package will be shipped, and active, in a 20′ shipping container. One quarter engine, one quarter gasifier, and one half biomass storage and handling. The scheme in all these units is ease of deployability.
So we were there not only to marvel at innovations in gasifiers, but to connect with and revive a sense of mission related to biochar. APL, especially founder Jim Mason, was intrigued by our efforts in Sonoma County, and the national presence the USBI conference will bring to the area. The sum of our meeting, extended by mutual interest, was that now was the time to take a closer, systemic, look at biochar production. And showing that innovative spirit again, they roughed out a design for a biochar maker, that just might be a mutual project. With all feeling jazzed at the possibilities for collaboration, we left with sense that, like organizing the conference, biochar is on its way, out west.
Ray Gallian